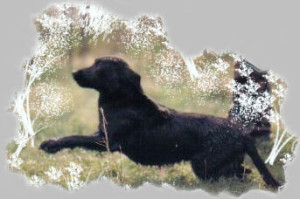 TAG joined us on November 4, 1991. Her mother was out of Sandylands, as well as several other outstanding English bloodlines, and her father was DYLAN. The reason we decided to keep her was because she was one of DYLAN’S first daughters and I wanted to see how she would turn out combining English show with English field.

As she grew her body type resembled more the conformation build along with the desire from her dads side to hunt. TAG was a joy to work with and when it came down to business she had her own unique way of carrying out her performance. She was not as quick as some but yet more precise than others. TAG never tried to cheat a test nor did she try to find an easy way out. The direction I put my hand down was exactly the way
she went and if I had to use my whistle to handle her she never refused me.

Whether it be out in the field hunting with her or competing in a U.K.C. hunt test she was always loyal to my commands. During a water test at a hunt I was running her in, one of her birds had drifted right in line with the blind retrieve she had to pick up first.
I sent her and she carried the line straight to the drifted bird. The gallery behind me hushed and you could of heard a pin drop. When she got within approximately 2 feet of that drifted bird I blew the whistle and she turned to look at me.I used the whistle and hand signals to get her around that bird and to the one she was to pick up. On her way back she went around the drifted bird to finish her retrieve. I then sent her for the drifted
bird, which she retrieved to finish her test. We both received a huge round of applause from the gallery.

As I stated, she was not as quick as some but her loyalty and honesty more than made up for it. She was quite special in our lives and it was a great pleasure working with her during the time we had her.